A Library Card for a Young Adult

When I turned 18, I went to the library and got an adult library card. My friends bought cigars or lottery tickets when they turned 18, but the badge of adulthood I wanted was a new library card. Rite of passage via public library.

The problem was that you couldn't even get a library card until you were 18 unless a parent came in with you and signed for it. Oh, I had one, but that wasn't the point. I wanted to be ID'd at the library. I wanted someone to look at my ID and verify I was old enough to be given a library card on my own.

I also wanted all the extras without parental permission: CDs, movies, and internet/printing privileges.

So that February, I walked into the Hamilton East Public Library after school and asked for a new library card. I waited forever, but finally I signed a slip of paper and had a brand-new adult library card. It looked the same as my previous library card, but I felt grown-up.

Four months later, I was interning for Congressman Dan Burton. A group of us went to get Library of Congress cards. The security guard asked one of the other interns "Are you a princess? You're so beautiful." We each sat to get our picture taken, signed on a touchscreen, and had a library card in hand within minutes. 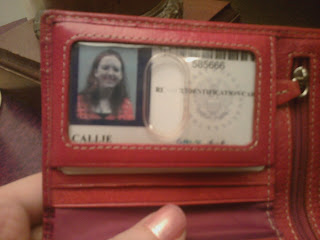 Three years later, I lost my wallet one icy night before a morning physics final exam. I knew I would be required to show my student picture ID or they wouldn't grade my exam. It was in my wallet. Also in my wallet was my bank card and driver's license. How could I prove my identity?

I'd have to take my chances. Maybe a TA would recognize me and that would be good enough.

The next morning, I grabbed an old wallet out of my desk. I kept emergency cash in it and would at least be able to pay the bus driver if it wasn't someone who recognized me as a student.

But after sitting the exam, I didn't recognize any of the TAs. I opened my old wallet and pretended to be surprised that it didn't contain my student ID. Sheepishly, I offered the TA my Library of Congress card. "I lost my ID," I explained. He glanced at the card and compared it to my name on the exam, and compared the picture on the card to me, in order to verify that I wasn't sitting the exam for another student.

"This is fine," he said. "It's a government-issued photo ID."

It's a government-issued photo ID, I thought. Bingo!

The student ID office accepted it (and my Student ID number) as enough proof to get a new ID. The bank issued me a temporary bank card. The DMV gave me a new license. (And charged $19, which was rough as I was going to be getting a new Driver's license in two months anyway when I turned 21).

It was library card magic.

Now You!
How did you mark your coming-of-age?