Some people can't mind their Ps and Qs 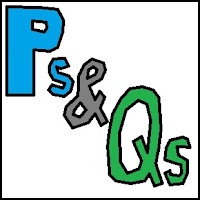 When I was younger, I volunteered at a living history museum, in costume and in character as an 1830s girl. I was usually Lezolitta Rothentropp, who worked at the Golden Eagle Inn, but sometimes I was one of the carpenter's two daughters or a member of the somewhat-hick potter family who lived at the end of town. What happens at a living history museum is that we are going about our day and visitors to the museum come by our house and visit with us. That's the whole premise: this is our home and you are stopping by and seeing what our life is like. This is our home.

So since this is our home I was constantly astounded by how many people would walk in and completely ignore us. How many times I was straight-up ignored by people when I greeted them. How many times people wandered around opening doors and cabinets. How many people asked to see what was in my poke (drawstring bag that fuctions like a purse) or demanded to know if I was drinking Mountain Dew* out of my mug.
*No idea why so many people thought we were disguising Mountain Dew in our mugs.
I was usually drinking water or, if it was particularly hot and I was working outside, occasionally blue powerade from powder.

I don't want you to think that all visitors or even most visitors were like this. But if you see a few hundred people, a couple handfuls of them will be inconsiderate and unfathomably rude. Oh how many times I wanted to break character and tell them off for their behavior in someone else's home. Yes, maybe I have some non-1836 items in my poke** but do you routinely ask women to dump their purses in front of you? Pro Tip: If you answered yes to that question and you are not a security guard, you should probably stop doing that.
**a baggie of blue powerade powder, a couple painkillers, general feminine products,
a small tube of sunscreen, and a container of oil for the sharpening stone for my whittling knife.

This feeling of being amazed at shocking rudeness has been reoccurring of late, while reading book reviews on Amazon. When I finish a book I like, if I know the writer (in real life or via blogging) I often look the book up on Amazon to see what the reviews are saying.

A writing instructor once told me she never reads her Amazon reviews because of the horrible things people will say to her face without any attempt at sensitivity. I read her book and found it intense and side-splittingly hilarious. I literally laughed out loud on several occasions. I almost cried a few times. When I read the negative reviews on Amazon, I felt sick. People weren't merely critical of the book, which would have been acceptable; they were attacking her as a person.

Interestingly, the most-vitriolic of the reviews were from people who had received the book free as part of an Amazon promotional program.

I have recently read several books from fellow writer-bloggers. I haven't gotten around to reviewing all of them on Goodreads & Amazon yet, but most were well-written and enjoyable reads. A few were a bit difficult to get through, and in those cases it was apparent to me that I was not the intended audience. I also received most of these books via promotional discounts, a promotional "free period" to encourage sales of a sequel, or bought them as an ebook (generally significantly less-expensive than print). So I have paid little to nothing for several hours of entertainment. In each case, after forming my own opinion I checked the reviews on Goodreads and Amazon. In nearly every case, I was shocked at the vitriol in the negative reviews.

I swear some people just have no clue that this is our home.

It's perfectly fine to say This house is too small or If you want your garden to grow better, you should plant different crops or I bet you people would really like Mountain Dew. That's perfectly acceptable criticism of the writing style. If it's not your cup of tea, that's also fine. Not every book is for everybody.

At least nobody ever walked in and said My God, whoever lives in this dinky dump is a trite asshole who is completely self-centered and should never have opened the door of this house to inflict her terrible interior decorating skills on people who don't have to come inside if they don't want to.

Okay, so that metaphor completely broke down. But seriously, even with the shocking rudeness we sometimes dealt with at the living history museum, people were never as rude to our faces as some people are to writers in negative reviews on Amazon.

Those people are jerks, you guys. They probably go into people's houses and psychoanalyze them based on the contents of their bathroom cabinet. Seriously.

Update: This post inspired Tia Bach to write about her take on this same issue in her post Words, Otherwise Beautiful, Can Be So Harmful and I would appreciate if you checked it out, too.

I got a thesis advisor for my graduate thesis in science-medical writing! I am quite excited & also sort of nervous. I am obviously becoming quite insecure about the whole thesis thing, which I'm sure you'll all look forward to hearing all about in July's Insecure Writer's Support Group.

I'll be hijacking Lee's blog Tossing It Out on Monday, July 16 during his Hijack This Blog! Campaign. Lee is the mastermind behind the April A-Z Challenge, and he's seeking blog hijackers while he does some serious work on his book. Update: see my post "What the heck is professional writing?" over at Lee's blog.

Is it really so difficult to leave a negative review without character-assassinating the writer?