Some things in the news about women 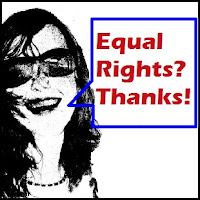 I've been hearing a lot about women in the news lately. I'm not sure if it's because women and women's issues are a particularly hot topic lately, or I am just noticing it more lately because I'm at that early-career age where young women start realizing that there truly are still some issues with gender inequality and take a personal interest.

Either way, the tangents some of these topics have taken are interesting, and I'm not entirely sure what to think.

Let's take Daniel Tosh, the comedian who suggested it would be hilarious if a woman who heckled him was gang-raped. That whole debacle is a giant mess, and it's sparked a lot of conversations about what is comedy and what isn't and can you do an appropriate rape joke and are rape jokes ever funny or is feminism stifling the free expression of comedy? While clicking around and reading many, many articles about the topic (people defending Tosh, people condemning Tosh, and so on) I ran across some kind of article which I have since been unable to find again that basically was a list of people doing rape jokes right -- which, the argument ran, was to make fun of the attacker or the culture that enables it, not the victim. I used to be vehemently against rape jokes being funny -- but then I saw a clip of comedianne Ever Mainard's incredibly funny sketch "Here's Your Rape" at the Chicago Comedy Underground. Ever discusses a real event in which she was seriously concerned that she would be attacked by a rapist, which didn't happen. The story is quite funny and pokes fun at the rape culture that causes women to constantly feel under attack, in which we are basically told to never walk alone at night "or you will be raped" and the onus is always on women to defend themselves rather than on society as a whole to make such actions unimaginable.

Then there's the recent death of the first female astronaut Sally Ride. I have to admit that I hardly knew anything about Sally Ride and very much enjoyed reading the many articles explaining her career and all the amazing things she's done. She died of pancreatic cancer at 61. Sally Ride seems like she was an incredibly amazing human being. She seems like somebody I would like, and a person every American can be proud to represent our country. She also seems like a very private person, who avoided using her name for publicity. It was not publicly known that she had pancreatic cancer, and it was not publicly known that she was gay. The latter fact seems to be getting rather a lot of attention. I wonder if that is important. I suppose it is good to have another LGBT role model, but a lot of the focus in articles and comments that I have seen seem to think that it is tragic that she "couldn't" come out while she was alive. It doesn't sound like it was a secret! She was with her partner Tam O'Shaughnessy for 27 years. While it seems like people should be able to be open with who their partner is, unfortunately it is still surprising when someone has a same-sex partner. (I've been trying lately to adjust my thought process to assume nothing about individual people until they tell me, but it's difficult to do that. I still find myself surprised, which means I still default to assuming everyone is straight.) And when do you announce that you have a same-sex partner? Do you hold a press conference? Do you have to repeatedly come out to every new person you meet for the rest of your life? Ride was already breaking barriers as the first female astronaut and had to put up with people asking her inane questions about that -- was she supposed to come out of the closet, too?

Finally, can we talk about the hullabaloo surrounding Marissa Mayer, Yahoo's new CEO? First the big deal is that she's a woman, then it's all about questions regarding if they appointed her to play scapegoat when Yahoo publicly tanks, then it's all a to-do about how she can manage a company after she has her child. It's all glass ceilings and glass cliffs and is this a good thing for women or is her "inevitable" public disgrace going to ruin careers for women everywhere, and also is this a positive for working moms or will working moms be expected to take less maternity leave because of Marissa Mayer? There's a lot of eyes on Mayer, and why? Because female CEOs are rare enough. Because pregnant women can be discriminated against while job searching (who wants to hire a woman about to have half her attention sucked away by her child, not to mention maternity leave?) and employed pregnant women worry about retaining their jobs. And lots of women are worried about how the Marissa Mayer-Yahoo situation is going to work out, and what it will mean for other American working women. It certainly seems insane that all this is tied up in one woman in the public spotlight.

So those are some things about women in the news lately that I've found particularly strange or baffling.