A Lady on the Interwebs

Good news, everybody! First, I've finally watched the entirety of Futurama that is available on Netflix. So now I will finally get all of those pop culture references. (Get ready, Battlestar Galactica; you're next.) Secondly, I've got two things for you today, and they're both about me on the Interwebs!* The first is about my experience as a female incognito as a male online** and the second is about my plans going forward and other places I'm writing online.

*See how clever I was with a title that covered both things?
**Apparently I write like a man?

Be who you want to be

What has always intrigued me about the Internet is the way you can be anybody you want to be. When I was somewhere between the ages of 12 and 15, we had a school seminar where police officers taught us about online safety, which here means told us really scary stories about sexual predators. But although the lesson was that you can never be sure that anybody is who they claim to be online, somehow what I took away was that nobody could ever be sure who I was. And that's what stuck with me for years.

While today I generally maintain an honest web presence in most areas, I was initially fascinated with the ability to be... well, anybody. But the most exciting part, to a girl who had heard the message that women are treated differently (worse) in the world and on the internet, was the ability to not be a woman.

I started avoiding identifying my gender. Not actively, just by picking genderless usernames for fan forums, mostly Lord of the Rings and Harry Potter. Years later, I played a text-based Lord of the Rings MMORPG for a while...as a dwarf, which is about the least sexual character you can pick, and text-based does of course remove visual gender reminders.

Then I started writing fanfiction. I wrote under names that could go either way -- like Morgan42, ScribeTaylor, AlexOfLothlorien -- and discovered that without an obviously female name like MrsLegolas or LadyAragornIsMyKing23, people assumed I was male. And consistently across various sites and forums, if I don't have a gendered username and don't reveal my gender, people assume I am male.

Apparently I write like a man. I'm the woman who writes like a man*. (Or perhaps the idea of gender-type writing is complete bunk.)

*Yes, I am quite pleased with that pun. Had to give mad props to Tamora Pierce.

It probably didn't help that many of my fanfiction stories tended to have a male main character (not always), but surely that isn't really a giveaway as to the writer's gender. After all, J.K. Rowling's main character is male...

Do I really write like a man? Text-comparison quizzes almost always say samples of my writing are like male writers. I pasted a sample of my short story Take the cow into Hacker Factor's Gender Guesser.

Can you read that? It said that if this is informal writing, its guess is male. If it is formal writing, it would somewhat hesitantly lean toward female. I personally wouldn't call my short story style particularly formal. So basically this test isn't sure I'm female. These results are fairly typical for me for this sort of thing.

I still don't know what to make of it. I'm not sure if I really write like a man or if my observations are merely the result of some kind of mass default assumption that a person online is male unless indicated otherwise.

Although I like being treated like a regular person (compared to being hit on or dismissed, in many situations), I am not ashamed to be a woman; if my work is ever published, I want to see it under my own name and not some identity created to obscure my gender.

This little blog has changed a lot in the past six months, nearly unrecognizable from this time last year. That's good. It originated years ago as a dumping-ground for poems and short stories*. As I began grad school, I occasionally posted excerpts from pieces I was working on for class, mainly for the interest of friends and family who were suddenly far away. Since my original participation in the A-Z Challenge in April 2011, my readership has changed, and I'm beginning to get an audience of science writers via Twitter networking. In many ways, my writing on the blog has changed to reflect the changing audience.

*As you can imagine it wasn't much of a hit, and those posts were removed long ago. 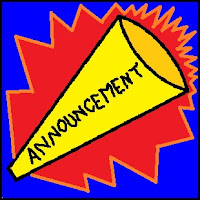 I cannot keep up the pace I've maintained these past six months, which is about two posts a week. I know you will all understand that that time I spend working on writing for this blog is time I am not spending on my graduate school writing assignments and my various fiction pursuits, which have been languishing.

Going forward, you can expect about one post a week. I think this will be a good balance for me; I enjoy blogging and it refreshes my creative thinking. Based on feedback to my posting while at the writing conference in Maine in early July, my writer buddies don't hate reading about science. So I intend to keep a balance of science-related and writing-related posts, as well as the occasional thing-I'm-thinking-about post. (Well, all of them are things I'm thinking about, really.)

Moving out into the Interwebs

I'll also be trying to do more out in the wider web. You can find me at BioBuzz, which organizes meetups for the Maryland biotech community, writing about things related to biotech in Maryland. At some point in the future, I will hopefully be writing a guest post for Ann Finkbeiner's science blog The Last Word On Nothing. (Ann wrote The Jasons which is an amazing example of science writing that I personally found inspiring, and I might have almost died of a heart attack when she asked if I'd be interested in writing a guest post.) So if I ever figure out what to write (and if the LWON team doesn't hate it :P) I'll let you know when that happens.

Oh and did you notice my new graphics? If you caught the Starhawk and the Mars Curiosity Rover post, you saw two. And digging into the archives, What does a villain look like? has new art, as does Loki stole my thunder. I've recently rediscovered how much I actually really enjoy making graphics, so I'm doing art in Paint and posting it at Portraits in Paint. (Feel free to submit a request.) And if you hate it...well, too bad! :P
Now for the question, since nobody likes posts without a question to respond to. So here's what I'd like to know:


Do you think it is possible to tell if a piece of writing was produced by a man or a woman? And does it matter?