What do you think of this story idea? 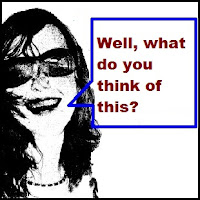 Well I'm still swamped with revisions, but keeping in theme with Halloween, I'm sharing with you the only semi-creepy thing I've really ever written that isn't about zombies.(I wrote this in 2010, then I got busy with grad school.)

The concept is crime fiction. I thought I'd try writing fiction that wasn't fantasy.

Then I realized I knew next to nothing about criminal law and criminal investigations, so it's been sort of chilling out in my "miscellaneous writing" folder.

This is one I might be interested in actually pursuing, so I'd love to get some feedback and/or suggestions.

“I kinda always wanted an axe,” she’d told him. They’d been sitting side by side on the edge of the bridge, arms through the metal bars of the barrier, bare feet dangling over the grey river. She was absentmindedly shredding a bright yellow dandelion, the petals staining her fingertips as she tore them from the flower and dropped them in fluttering clumps into the water below.

“There’s just somethin about it,” she‘d said, staring out over the horizon, “somethin kinda just basic, ya know? Like there could be a lotta things you didn’t have, but if you had an axe, you’d be set.”

Now, looking down at her in the coffin, Jake sighed. If only you’d had that axe, Mary.

“She sure was a pretty girl,” Donman said beside him. The big man shifted slightly, briefly printing his pistol against his sleek black jacket. As if anybody at the wake had any doubt hulky Les Donman was bodyguard for hotshot young criminal prosecutor Jacob Marten.

“She was beautiful,” Jake said. “The kind of girl who was beautiful even when she hadn’t washed her hair in days and was barefoot and sunburned and had a bit of dirt on her face.”

“Not the kind of girl who’d play the high society power game well,” Donman observed. “Shame about the eyes.”

Jake had been trying not to notice the eyes. The coroner had done his best making Mary look like she was merely asleep, but without eyes behind those closed lids, it was not quite right. Maybe a skilled coroner could do it, but not one who only cleans up old fogies who croaked in their sleep. Despite the makeup on Mary’s face, you could see where the eyelids had torn.

“They were brown,” Jake said. “Nothing special. And nobody would want to see her eyes right now anyway.”

That was a lie. They were special. C’mon, Jake, yull never guess what I found! Warm brown eyes sparkling with mischief. But Donman the suited tool didn’t need to know any more about Jacob Marten’s childhood sweetheart. As soon as the funeral was over, they’d be jetting back to the city and he’d never come back to this podunk town again.


“Good of ya ta come, Jake.” A big, sun browned hand clasped Jake’s pale one, and a large man in a worn suit pounded his shoulder in a half-hug.

“Joseph,” Jake said, recognizing the man as Mary’s older brother and only family. “Sorry for your loss.” The words were automatic and awkward. Joseph smiled mechanically and tugged a bit at the tie-knot at his neck.

“Thanks,” he said. Then softer, “It really means a lot ta me that ya came down, Jake. I mean, everybody loved ‘er, but the way I see it, you’re the only one loved Mary as much as I did.”

“I would have married her, Joseph,” Jake said, looking at the girl in the casket. “I would’ve married her seven years ago.”

“Aye,” he said, clasping Jake’s hands again with both of his and pressing a small velvet box into them. Joseph leaned in a bit so Donman, who was standing respectfully a few feet away, couldn’t see his lips moving. “Mary gave me this seven years ago ta put in the safe at the bank. Said ya’d given it to ‘er and told ‘er to hang onto it, in case she changed ‘er mind. Thought mebbe ya’d like it back.”

Jake smiled sadly and slipped the box into his pocket. “Thanks, Joseph.”

As he turned to leave Joseph to be consoled by the rest of the mourners, Joseph said quietly, “She’d been taking night classes for law at Saint Lucy’s.”

Jake froze, his back to Joseph. “And she had money saved up,” Joseph finished. “For a train ticket to the city.”

Jake nodded, unable to do more, and walked quickly towards the door. Donman fell in step as he passed.

“Done with this for the night?” the bodyguard asked.

“Yeah,” Jake said. “Let’s go back to the hotel.” They were staying in a suite in an upscale hotel a forty minutes’ drive away. “I’m going to hit the bar.” And drown all my what-ifs and if-onlys.


From this scene, the story will go on to have Jake return to the big city and eventually become obsessed with the idea that the psychotic partner of a man Jake had recently put on death row is stalking Jake and is responsible for an increasingly-frequent series of tragic events befalling everyone in Jake's life.

No, I haven't decided yet where this town or "the big city" are exactly. Somewhere in America. And again, I don't know much about criminal prosecution, so....I could be completely off about basic things.

So are you interested? Is it worth me doing a ridiculous amount of research into criminal law and/or criminals? Or just stick to fantasy and nonfiction science writing? :D
By Callie Leuck